The story starts in the Summer of ’79, actually, when My Beloved Bangalan and I were still unmarried but curious about each other. Mingling with the crowd just outside the Globe Cinema in Calcutta, I felt a tap on my shoulder and a female voice said, “Hi, how are you?”

A sort of weak and desultory conversation followed. I introduced My Beloved Bangalan to the girl who had tapped me on the shoulder.

The short chat ended and as the Bangalan and I continued on into the cinema, she was curious. Naturally.

Consternation, that exists to this day, because she still talks about the day she first met my cousin sister.

Flashback, <tirrarara, tirrarara,tirrarara,tirrarara> to the Summer of ’69, in Ahmedabad, in the western Indian state of Gujarat. A 9-year old me is shown a photograph and told, “We’re all moving to Calcutta. You have cousins there. See here is your cousin sister”. 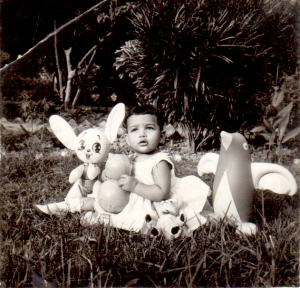 As I look at the black and white picture of a chubby, pretty girl in a white frock sitting on the grass surrounded by soft toys, an inflatable rabbit and a penguin, I’m wondering, “What the hell is a cousin?”

Cautious enquiries did not reveal much other than the fact that there was a boy cousin too. They were siblings of some sort, I gathered. But exactly why I’d never heard of such a thing and why they lived so far away in a strange city, I could not understand.

Then we left Ahmedabad in a Fokker Friendship F27. I sat at the window and watched the propeller turn slowly and gather up speed for my first flight ever. Soon we were in the lounge at Bombay Airport where we had a long wait. Then I had enough time to notice an even larger airplane, a Sud-Aviation Caravelle with rear mounted jet engines, that was quieter, smoother and which took us to Calcutta’s Dum Dum Airport. It was a strange name, a strange city and a strange man who said he was my uncle, a strange lady who said she was my aunt, a strange city with strange signs and a strange little car, a Fiat, I learned, with a strange speedometer – an orange bar that became wider or shorter with changes in speed that took us to a strange house and a big dog.

I found out later that the man was younger brother to my father and he worked in the same office as my father. Pixie and Nilu ( or to give them their real names, Anita and Neil ) met us regularly. Neil and I went to different ( rival schools ), both were younger than me by a couple of years or so. As I grew more aware I heard conversations and gathered slowly over the course of time that the two brothers had had disagreements in the past. A certain reserve was always present, between us. As we grew older cousinly visits on both sides became more sporadic and by the time Pixie tapped me on the shoulder 10 years later, the cousins had become quite polite and civil, but any warmth that had existed was missing. Shortly, thereafter, the cousins left for Dubai, including a third cousin, Vanita, who’d been born in the interim.

Flashforward <tirrarara, tirrarara,tirrarara,tirrarara>  to the summer of ’97. I landed in Toronto, Canada, minus wife and kids who stayed back in Calcutta. Pixie reached Calcutta for a holiday and met up with My Beloved Bangalan and discovered that I had moved to Canada.

“Oh, he left in June? Neil also left for Canada around the same time!”

And so, in the summer of ’97, I met Neil and his wife in Toronto, after many years. Shortly afterwards, his mother, my aunt arrived in Toronto and then Vanita, too. Pixie, an ardent fan of the NZ All Blacks lives in Auckland, NZ. Neil has three kids and we all meet up at regular family, festivals etc and we’re probably closer now than we were when we first met in the summer of ’69.

If you ask me now, however, what cousins meant to me growing up I could not tell you. Now, I guess, they’re just family.

The Date of the Jackal