This is the concluding part of the Normandy sub-series within the Punjabi in Paris series. You can, of course, read Part 1 and Part 2. Part 2 has more pictures and even, hold your breath for this one, shaky videos!! 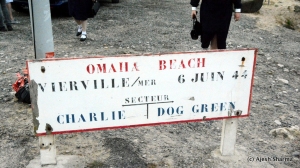 We left Ste Mere Eglise after a late lunch / tea of fries, beer and Coke and drove out towards Omaha beach. Drove down the highway and came to the exit ramp that would take us to St Laurent sur Mer. However, even at this late stage of the day ( it was past 5pm) , the ramp was closed. We were directed back to the highway and told, in French to head over in the direct ot Grandcamp and sweep around the back streets, for there was no parking anywhere near Omaha Beach. Miles out of our way, we drove for another 45 minutes, past signs pointing to Pointe du Hoc. Normally, I would have liked to stop there and see the scene of the fruitless labours of the Rangers who were sent out to destroy guns that did not exist. Given the lateness of the hour we pressed on through the villages around the coast and then suddenly we in Vierville, aka Charlie / Dog Green sector of Omaha Beach.
The memorials 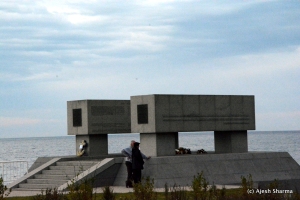 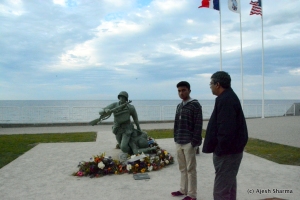 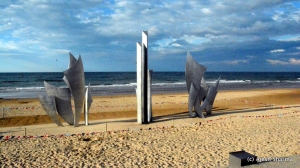 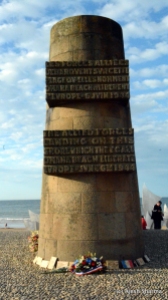 The beach, the remains of the Mulberry harbor, gun emplacements and bunkers. 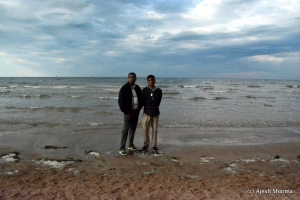 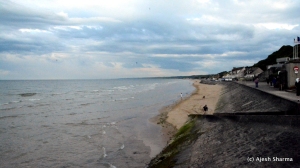 We saw a solemn and silent commemoration ceremony and finally a bag pipe band.

Then it was time to drive back to Paris. This is the one major goofup on the trip. We should have spent another night in Normandy, got a good nights sleep and driven out the next afternoon, after another walkabout around the area. Instead, we flogged the driver back into the car and drove off on the 3 hour return trip back to Neuilly-Plaisance.